by Featuring Mark Eisenman and The Trio 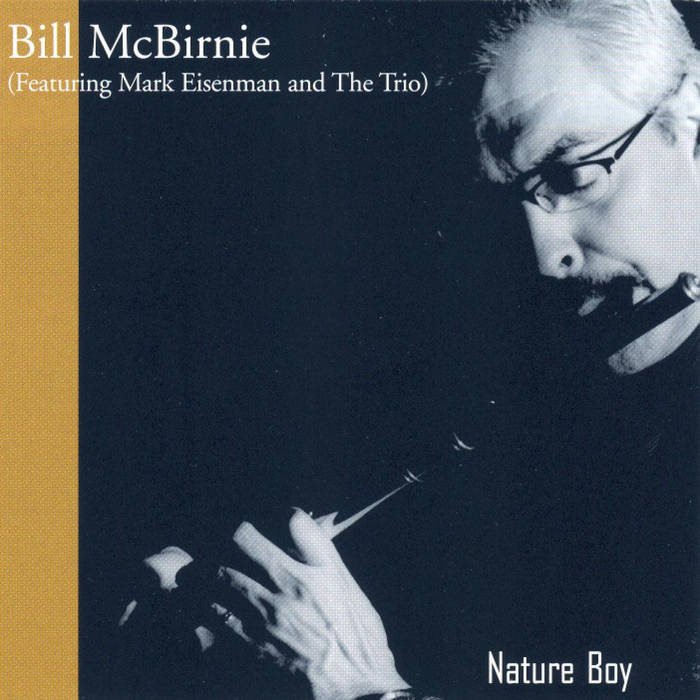 "Dear Maestro McBirnie...This just blew me away. Great, great playing...Innovative...I have never heard anyone play like this...Great technique and music making.  The scales are so even it sounds like you wrote the Taffanel scale book...Bill, when you read this, I have to take my hat off to you.  This is great playing by any standard." (SIR JAMES GALWAY, Yahoo, Sir James Galway Flute Chat, Message #507, Dec. 25, 2005)

McBirnie has always handled bop exceptionally well. You can also hear his years at the conservatory in his sound--a pure, transparent tone at rest, brightening with exertion--but he swings like someone who grew up with a large collection of Blue Note and Prestige LPs down in the basement.  He's entirely idiomatic, but also effortlessly inventive, qualities too often mutually exclusive in jazz these days. (MARK MILLER, The Globe and Mail)

Bill McBirnie’s quartet and duos on Nature Boy show him as an assured soloist who revels in his instrument rather than being confined by it. He moves comfortably from pure-toned playing to rocking improvisations that tenor players would envy. Even on sentimental material such as “Nature Boy,” he is entirely sincere, with no hint of irony, and the result is heartfelt...It is all beautifully recorded, unclassifiable, and timeless. (MICHAEL STEINMAN, Cadence magazine)

Nature Boy is a CD with many influences. Styles are examined and exploited completely and meticulously. This band doesn’t just handle “trio jazz”; they hand “trio jazz, a la Garland” and “bebop quartet, a la Monk”. An effort is always clearly made to be faithful to the influential source material. However, this does not limit McBirnie or the band. Rather, it provides them a wider compass with which to work. No matter how influenced a given piece is, McBirnie’s unique musical persona is present. (DAVID MIELE, Jazz Improv Magazine)

This is a CD collection that has much style, and creativity. Bill McBirnie is top notch in every solo performance, and Mark Eisenman is one of the finest jazz pianists around. Steve Wallace on bass and John Sumner on drums add their own special touch of class to the songs. This collection is a winner in every way imaginable. Excellent! (LEE PROSSER, JazzReview.com)

Recorded in two sessions, straight to tape with no overdubs and few takes, Nature Boy gives listeners an honest portrayal of the musicians’ skills and imparts an energy that’s lacking on many jazz recordings...I highly recommend this recording. The music is joyous and energetic throughout. I’m just itching to play it for some classical flutists I know. I can’t wait to see the expressions on their faces when they hear Bill practically turn the flute inside out on Teaneck. (MERLIN WILLIAMS, WholeNote)

Bill McBirnie stands out as a dedicated practitioner rather than a doubling saxophonist. That devotion shows up in the airy sweetness of his sound at ballad tempos and in the remarkable control he can bring to rapid-fire, skittering runs on up tempo, Coltrane-inspired material. His recent CD, Nature Boy, shows his consistency as well as the empathy he enjoys with The Mark Eisenman Trio. (STUART BROOMER, Editor, Coda)

With a full tone, pin-sharp articulation, the occasional witty quote and some jazz licks that pay a compliment to the listener who can catch them (and which sometimes evaporate before they can be fully identified), McBirnie demonstrates that he is an impressive performer by any standard - and all the more so in collaboration with a rhythm section he himself dubs “the best oiled swing machine in the country”. I couldn’t agree more...The quartet really swings and the duets are just beautiful. The album is a real treasure. (DON SMITH, 'Night Train')

Although I have performed on a wide variety of recordings to date (including my own more recent Extreme Flute projects), I have often been urged (at times admonished) to record an album of straight-ahead jazz with a good strong rhythm section. Well, I finally got around to doing so. However, the group I have selected for this purpose is far more than “a good strong rhythm section”. In fact, it would be better described as “the best oiled swing machine in the country”--that being, The Mark Eisenman Trio.

Mark Eisenman (piano), Steve Wallace (bass) and John Sumner (drums) have been working together for years which entirely explains the ease and consistency with which they are able to set solid and convincing grooves. Indeed, their individual and collective musicianship made this undertaking a relatively facile exercise.

The recording was split over two sessions--one afternoon with The Trio and one morning with Mark Eisenman alone. Both dates were essentially blowing sessions; that is, no rehearsing except to arrange the tunes a bit beforehand and to run down the heads before each take. Needless to say, Mark, Steve and John were so well suited to the task that, at times, it seemed as if all I really had to do was to call the tunes.

So here are the results of one afternoon with The Mark Eisenman Trio followed by one morning with Mark Eisenman alone. The performances, both by The Trio and by Mark, are most certainly a compliment to me. I hope (though with less certainty) that my performances constitute something of a compliment to them. In any case, I would like to thank all of them for delivering such polished workmanship and I would also like to say to you, the listener, that it was a pleasure and an honour to work with such like-minded and accomplished players.

In addition, I would like to point out that the engineer, Inaam Haq of Cherry Beach Sound, demonstrated a sympathetic understanding for the sound required on this recording. His thoughtful and considerate approach is becoming rather uncommon in the trade. Acoustic jazz calls for a measure of sonic, as well as musical, risk-taking that is absent in many of today’s recorded formats where punching, overdubbing, virtual tracking, looping, cutting-and-pasting, fader-riding and so forth are par for the course. Not every engineer is prepared to accept and work with the immediacy and uncertainties associated with acoustic jazz. In that sense, Inaam functioned much like a member of the band.

I genuinely hope that you, the listener, will enjoy the musical, as well as the acoustic, results.

Finally, I would like to dedicate the final track, Nature Boy, to my very own Svetlana because I know how very partial she is to melodies that are both slow in tempo and minor in mode but more importantly because, with her, I have come to a much more profound understanding of the last phrase of the lyric to the tune...