by The Bill McBirnie Duo/Quartet 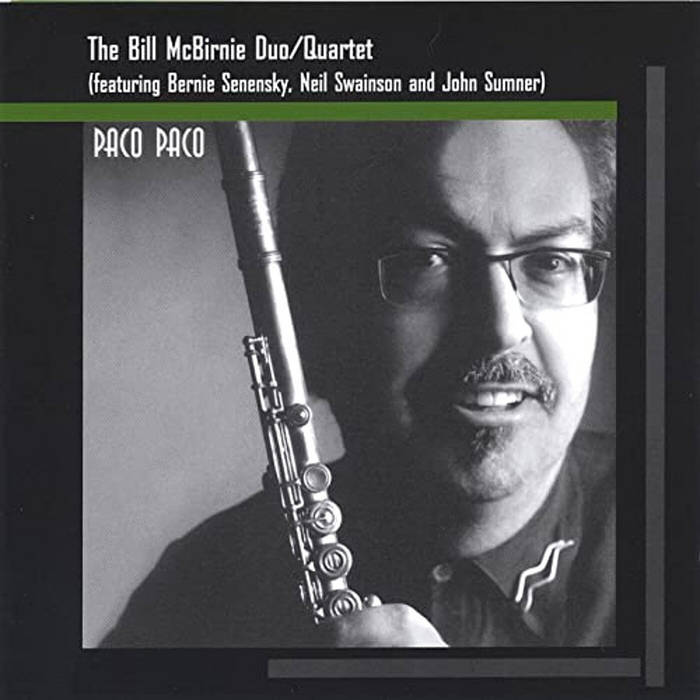 Dear List, Dear Maestro McBirnie,...When I saw that Bill McBirnie had a new recording out, I ordered it immediately…It just blew me away...I would recommend that you all pick up a copy…Bill, when you read this, I have to take my hat off to you. This is great playing by any standard...Best wishes, SIR JAMES GALWAY (Galway-Flute-Chat)

Toronto's Bill McBirnie occupies the rarified air of jazz flute with a sense of style and swing that sets him apart. There are precious few flutists who can make the instrument burn with musical intensity the way Bill does. On his new album, Paco Paco, McBirnie shows a range of emotional colors on both Latin and jazz standards in duo and quartet configurations... Bill McBirnie deserves to be placed alongside Moe Koffman and Herbie Mann in the pantheon of jazz flute. ANDY SHEPPARD, After Hours, CBC Radio One, Pick of the Week

This is one of those CDs where I find it really difficult to choose favourite numbers. The entire album is a joy to listen to, not only for Bill's beautiful playing but also, as one would expect, for the musicality and sensitive contributions from pianist Bernie Senensky, bassist Neil Swainson and drummer John Sumner. JIM GALLOWAY (The WholeNote)

Widely acclaimed for his remarkable flute playing, Bill McBirnie has comfortably stretched his repertoire to include bop and the classics, Latin music and original compositions...Throughout this CD, Bill's melodic leanings are vividly apparent and his improvisations demonstrate an enviable fluidity...Very striking music, played with skill and warmth. Indeed, it is not at all hard to see why classical flutist, Sir James Galway, says of Bill McBirnie, “I have never heard anyone play like this.” BRUCE CROWTHER (Swing2Bop.com)

Listening to McBirnie makes his credentials clear. He dips into the nectar of a melody and his dulcet tones rise to trigger the core of his imagination for some really amazing improvisational flights. These facets are abundantly manifest on Paco Paco. JERRY D'SOUZA, AllAboutJazz.com

The album is comprised of mainly familiar material...all imaginatively presented and skillfully executed. McBirnie and his band bring a fresh approach to the entire repertoire. One of the most striking features of McBirnie’s playing is his focus. His tone is crystal-clear, his execution is remarkably precise and he tempers his impressive technique with a strong sense of musicality as well as a refined approach to his improvisations. The result is a unique style from which all of these tunes benefit greatly. This album also has a very natural feel to it owing to an audibly comfortable relationship between the players, [and] the conversational interplay between McBirnie and Senensky, found throughout the album, is a testament to this relationship. JUSTIN LITUN (International Association of Jazz Educators)

Paco Paco is a collection of what are flute-based interpretations of some of great jazz classics. But this description does not adequately portray the creativity and uniqueness of McBirnie’s work. For example, Rollins’ “Doxy” and Monk’s “Hackensack” (and A reprise) come across as both familiar and new. His interpretations encourage the listener to gain a fresh perspective on pieces they have probably heard hundreds of times. PAUL SAKION (Jazz Improv Magazine, Spring 2008)

Bill McBirnie is a world-class musician who plays with classical virtuosity, jazz-swing intensity and Latin appassionato, beginning with [John Coltrane's] "Like Sonny" which introduces Bill McBirnie in a flash of brilliance.  He runs the flute through its harmonious and melodic paces, at times gentle as a breeze, then building his solo to a gale force wind but never loosing the pleasing, melodic soul of the tune...The album also swings hard in straight ahead jazz quartet fashion...The rhythm section, propelled headlong into the glory of the [title track written] by Senensky, lets loose volley after volley of excitement...The duo selections with flutist McBirnie and pianist Senensky, two masters of their instruments, are nothing less than fantastic, performed...with brilliance and sumptuous beauty. PAUL J. YOUNGMAN (www.vinilemania.net)

Bill McBirnie's fourth CD for his Extreme Flute label, Paco Paco, covers a lot of familiar ground but with a fresh outlook...The one original is Senensky's turbo-charged, "Paco Paco", a demanding work which all of the musicians master with ease. Highly recommended. KEN DRYDEN (All Music Guide)

After my most recent and well-received CD, Nature Boy (featuring the Mark Eisenman Trio), I considered doing a Latin-oriented project because, after a long though not necessarily sought after hiatus of several years, I have enjoyed the opportunity of working in several excellent Cuban formats over the recent past; notably, with percussionists Wilson Acevedo (of Cache), Alex Godinez (of Proyecto Charanguero) and Daniel Stone (of Mamboso).

However, in what turned out to be a natural progression, I ended up approaching pianist, Bernie Senensky, because I have also had the good fortune to work with Bernie a good deal over the past couple of years—in his Moe Koffman Tribute Band, as part of the back-up team to vocalist/songwriter, Michele Mele, and simply as a duo.

Bernie has extensive and impeccable credentials and is indisputably a world-class performer. Stylistically, he is something of a “musical chameleon”—though always with his own striking iridescence. I have matched him here with Neil Swainson on bass (who is a stalwart and unflappable performer of truly remarkable skill) as well as John Sumner on drums (whom I see as a terribly overlooked resource in this country and whom I am, therefore, very pleased to have on this session). Combined, Neil and John provide what is a sure-footed foundation for the quartet tracks while, with respect to the duo tracks,...well,...Bernie and I are on our own...

I am also very pleased to have Inaam Haq of Cherry Beach Sound serving as engineer. He ensures a transparency and immediacy in the sound that is consistent with the spontaneous nature of this undertaking.

In terms of repertoire, I admit that I tend to shun original material, preferring instead to pick tunes I think the listener—as well as the musicians—will either know or be able to relate to quickly and easily. However, on this album, I made an exception of the title track, “Paco Paco”, which is an original by Bernie. Stylistically, this tune opens with a Cuban tumbao and then proceeds directly into a Brazilian groove. (Think Hermeto Pascoal...with a dash of bebop...which is also why Bernie routinely incorporates some swing into the delivery.)

Historically, “Paco Paco” formed part of the repertoire of the Moe Koffman Quintet. Moe performed this piece quite often and usually with a comic remark to the effect that Bernie had deliberately written the tune so that he might find himself in a good position to profit from “the day when musicians get paid by the note!” Bernie conceived the melody line for two flutes but, because there was only one flute player in the band (...namely Moe...), Bernie would always double the melody line...which is one of the reasons that the tune came to be called “Paco Paco”...instead of just...“Paco”...

Before the session, I indicated to Bernie that I was quite prepared to deviate from my “no originals” policy with respect to this particular piece because,...well,...if we didn’t record it, then it was not likely anyone else would do so anytime soon...and precisely because—as you will hear—it is a rather tricky piece of work...and one which I hope you will enjoy, nestled as it is amongst the more standard fare of Coltrane, Monk, Rollins...and the rest!

My heartfelt thanks to Svetlana, Anastasia and Alissa for their love as well their patience but, most of all,...for just being who they are...My thanks also to Bernie, Neil and John for their superior craft and workmanship; to Memo Acevedo for initiating me into the Latin realm well over ten years ago (and ever so graciously bearing with my inexperience at the time); and, finally, to Jazz.FM91 for making a round-the-clock commitment to jazz—as well as Latin jazz—here in Canada.