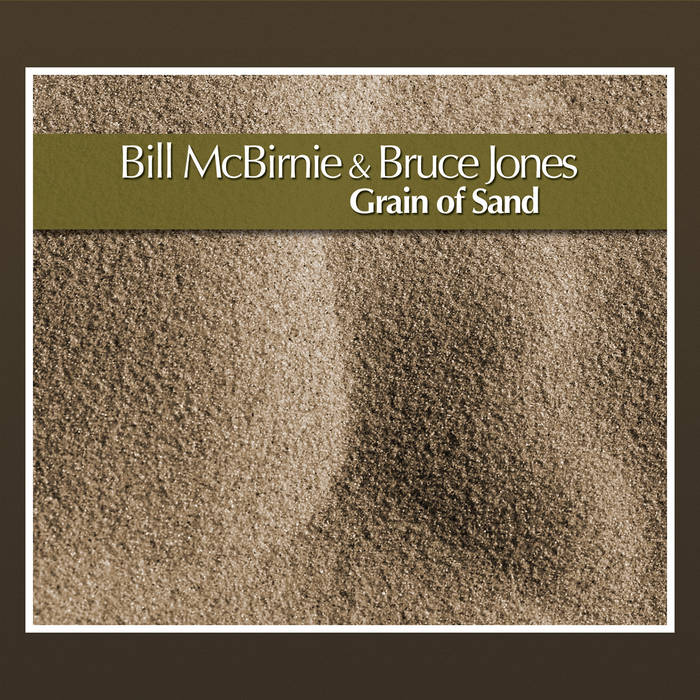 "...McBirnie’s brilliant flute technique and sensitive improvisatory style happily unite with Jones’ diverse skills and genuine gift for songwriting as they demonstrate their shared love for Brazilian music. You will sense the empathy between them immediately, from the opening track of the album, “Grain of Sand”, where bossa nova is fused with the plaintive melody of traditional Portuguese fado. Flickering like a candle caressed by the wind, the sound of Bill’s flute enchants the listener, right from the opening few bars.  And following this tender opening comes a whirlwind of samba rhythms combined with hip-hop vocals and yet more flawless flute improvisation on “If I Stay With You”. Just the two opening tracks portray the scope of moods in the music awaiting you on the rest of this album!…”  (LEONID AUSKERN, JazzQuad.ru)

"Hi Bill, I meant to write you months ago when I first listened to your record [Grain of Sand]. It is without doubt the most outstanding record by a flute player that I’ve heard in a very long time. I loved everything you did on it, including the overdubbing, the alto flute, and all the rest. It’s just a great record and I carry everywhere. In fact, I loaded it into my iTunes library so that I can listen to some decent flute playing while on the road." (SIR JAMES GALWAY, February 2016)

“I have always admired Bill's great technical facility, melodic clarity, and seemingly effortless inventiveness...Here he swoops and soars with his trademark mix of bebop and Latin jazz phrasing. The settings range from sambas and bossa novas (reflecting Bruce Jones’ Brazilian upbringing) to rock, hip-hop, fado and other folkloric elements that he has integrated into his own very personal mode of expression.” (PETER WESTBROOK, The Flutist Quarterly, Spring 2016)

“…Drawing inspiration from Brazilian samba, maracatú, forró and choro, Bill McBirnie and Bruce Jones create a fresh, unique, seductive and focused sound…Although each of the fourteen pieces has its own identity, they share a consistency that could easily be perceived as a discourse on one continuous thought…”  (RAUL DA GAMA, Latin Jazz Network)

“…McBirnie fits into this style of music perfectly as he demonstrates remarkable power and control.  He is a superb soloist.  As I listened to this CD, over and over again, I noticed how fluid all the arrangements were.  The whole album flows, from one moment to the next…”  (DAVID SWIDERSKI, BandBlurb.com)

“…Bill McBirnie and Bruce Jones blend a delightful taste of jazz with soul to deliver a thoroughly compelling performance…From the production level, to the musicianship, to the mind-blowing flute solos, “Grain of Sand” delivers in grand fashion…” (CHRIS JACQUIN, Rock n’ Roll View)

“…This record really excited me because it’s outside the realm of our typical submissions, but even more so because this Extreme Flute album has kept my spirits high, my mind focused, and my mood uplifted…”  (JOSHUA SMOTHERMAN, Middle Tennessee Music)

“…The strategic interweaving of melody and impressive flute performances are an absolute delight…”  (NICK KOTTENSTETTE, GigBand.com)

Bruce Jones and I first collaborated about 15 years ago on my debut album, Desvio (which was subsequently nominated for a Toronto Independent Music Award). This initial recording project came about as a consequence of working regularly with Bruce's Brazilian rock band, Da, and as a further consequence of dressing tracks for Bruce on his various Da, Amazon Dreams and other recording projects. After a while, I had done so much work with Bruce (whose songwriting I always admired) that I suggested to him, “Maybe we should try and do a flute-oriented project.” To my surprise, Bruce was more than happy to oblige and that suggestion evolved into our first album, Desvio, which he dubbed “extrema flauta” (and which we anglicized as “Extreme Flute”).

Our musical paths diverged thereafter but, about a year ago, Bruce asked me to do some dressing for a couple of tracks he was working on. This went really well and, in the course of doing so, I learned that Bruce had a lot of material in various stages of completion on his hard drive. Once again, I suggested to him, “Maybe we should extend ourselves and do another flute-oriented project.” Yet again, Bruce was happy to oblige and Grain of Sand is the result. As fate would have it, this project has evolved into another incarnation of Extreme Flute!

Bruce is—and always has been—enormously talented, on multiple dimensions. Musically, what he does is ostensibly Brazilian (in no small measure because he was raised in Brazil). However, he combines that rich musical heritage with many other influences, ranging from rock & roll and hip-hop to new age.  For me, the big draw in working with Bruce has always been both the diversity of his material and his openness to improvisation (which is what I like to do most of all). These features of his work have always provided us with a solid basis for collaboration—both then and now.

A project of this nature—involving just the two of us—takes considerable time to complete and so it inevitably proceeds in stages. Each track starts with Bruce writing, playing and recording whatever idea he has in mind. After Bruce has laid down what is often a fairly complete track, we then overlay any flute melodies he has in mind. In addition, we conjure up shots and harmony parts and overdub these. After that, we go back and I improvise over the entire track. Finally, we take whatever we have (...which is typically far too much...) edit it and mix it down. Of course, we “subtract” far more than we “add” as the process unfolds until sooner or later (...usually later...) we find what we're after.

The end result of this most recent collaboration, Grain of Sand, is both a fitting theme and title, because there always has been—and there always will be—a lot more from wherever this came.

Finally, Bruce and I would like to express our sincere gratitude to Canada's premier jazz station, Jazz.FM91, for including “Tudo Bem” (a track from our first collaboration, Desvio) in their spin cycle for what is now close to 15 years!

(3) Quando A Chuva Cai (As The Rain Falls)
- ambient (instrumental)